​currently live and work in Montreal, Canada
Website: https://bgosborne.weebly.com
Published Thursday Dec 13, 2018
all images copyright and courtesy of the artist
​

​What does it mean to be transgender in today's society?
I can only speak for myself; I identify as bigender, gender-variant, transsexual and sometimes just as trans depending on the social context. I pass as male in the majority of my social interactions with strangers. I do not enjoy being read as male around cisgender people, but since I am often afforded access to male spaces and conversations, it’s fun sometimes to mess with people and call them out on shitty behaviour and talk about trans issues if I feel safe to do so. To put it simply, I am living my life the best that I can as a trans person with other intersecting entities. I love being trans, but being trans is not always safe.

How can trans people and other minorities secure their independence that they can truly represent themselves freely without society attempting to categorize them into stereotypical and false representation?
This is a huge question, the only clear thoughts I have at the moment are:
Trans people need to be behind the scenes and in front of the camera when telling our stories.
We need to keep making weird films and videos about our own experiences and histories, and archiving/preserving our work.
We need to be in charge of, or at the very least consulted in, trans-related legislation.
We need to adopt anti-prison politics, because prisons do not help anyone, especially trans feminine people of colour.
We need to support sex workers.
Our biggest barriers are institutions that refuse to change, because the same type of people are running them. We cannot secure our independence if people in power see us as a nuisance or a danger to cis-ciety. 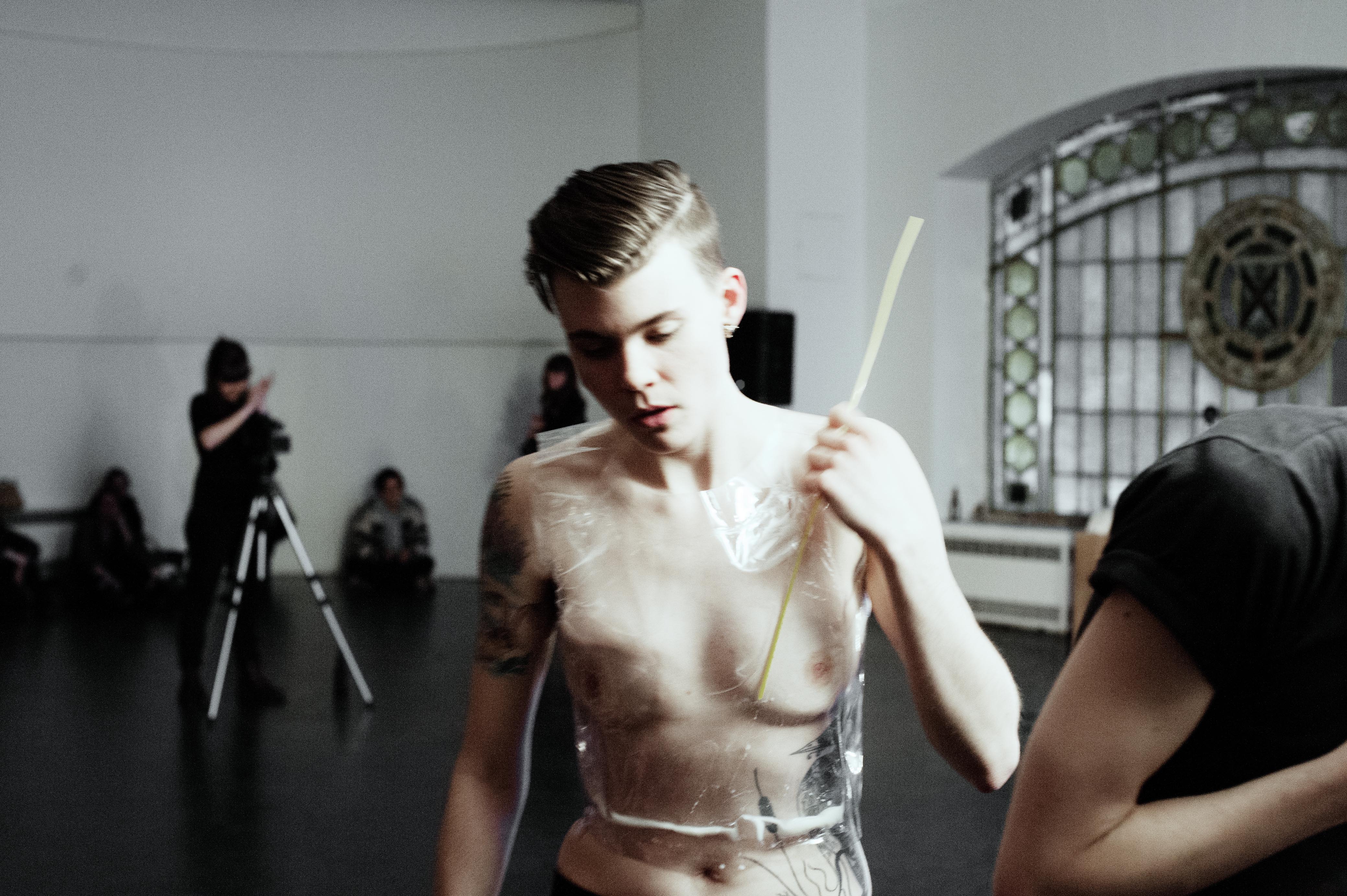 When did you transition?
I’m not done transitioning yet! I won’t ever be done. I think the more important thing is that I am doing things for myself, things you can classify as transitioning, to make myself happy in a world that makes this exceedingly difficult.

I think we humans are always changing and growing, always in transition. I think the most important thing about living in this world is, like you said, to be happy being yourself. Being yourself, or being your best self, sounds easy but it's a very long journey. Does your family understand and support you?
I have a big family, not all of them understand my gender identity or expression, but that’s okay because they do their best to support and respect me. Sometimes this means they speak up when they hear colleagues or strangers being transphobic, other times it means they make an effort to use my pronouns correctly. It’s a constant unlearning/relearning process.

Do you think your work has influenced their perspectives on identity?
To be honest, I'm not sure if any of my family members know what type of art I make! I originally went to school for drawing and painting... I'm sure they are aware that my work is very much tied to my gender identity, but it's not something we talk about. I will have discussions about my life and current politics if they are willing to talk with me, but my practice is not talked about in too much detail. My dad has definitely done his own research on gender-variance after I came out to him several years ago. Having a child who is "different" has changed their perspectives on gender identity and expression, for sure. My older sisters are also asking me questions about how I choose to identify; they are very respectful and open to unlearning, which is very important.

That's nice that your dad has done some research, it must mean a lot to you. And also your sisters who respect and care about you. Are you the youngest one? I think it's important to make progress together, and that what family means. Listening is also a very important part of communication. Have you ever felt uncomfortable bringing up the topic of identity with your family and friends?
I am the third youngest of six children; I was originally a middle child, and I got three step sisters when I was four. We were known in our hometown as the Brady Bunch. I’ve never felt uncomfortable bringing up identity with friends or family. I was a bit worried at certain points about what they would think when I was younger. I don’t worry about that any more. I’m interested in trying to talk with family and friends about other topics that reach beyond my transness. 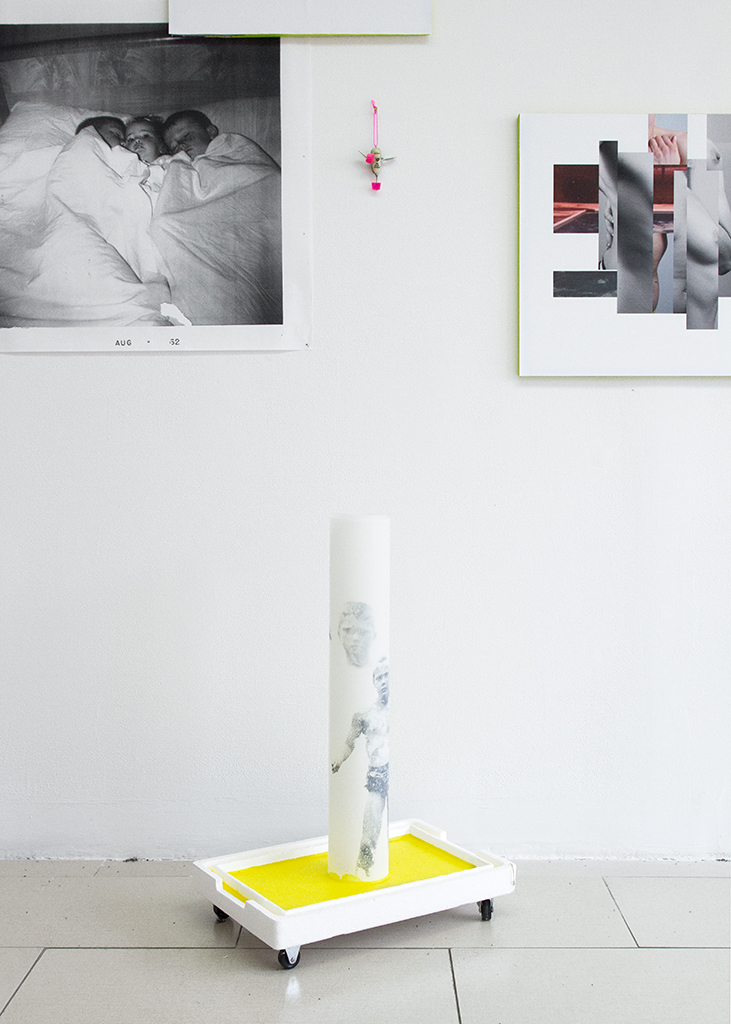 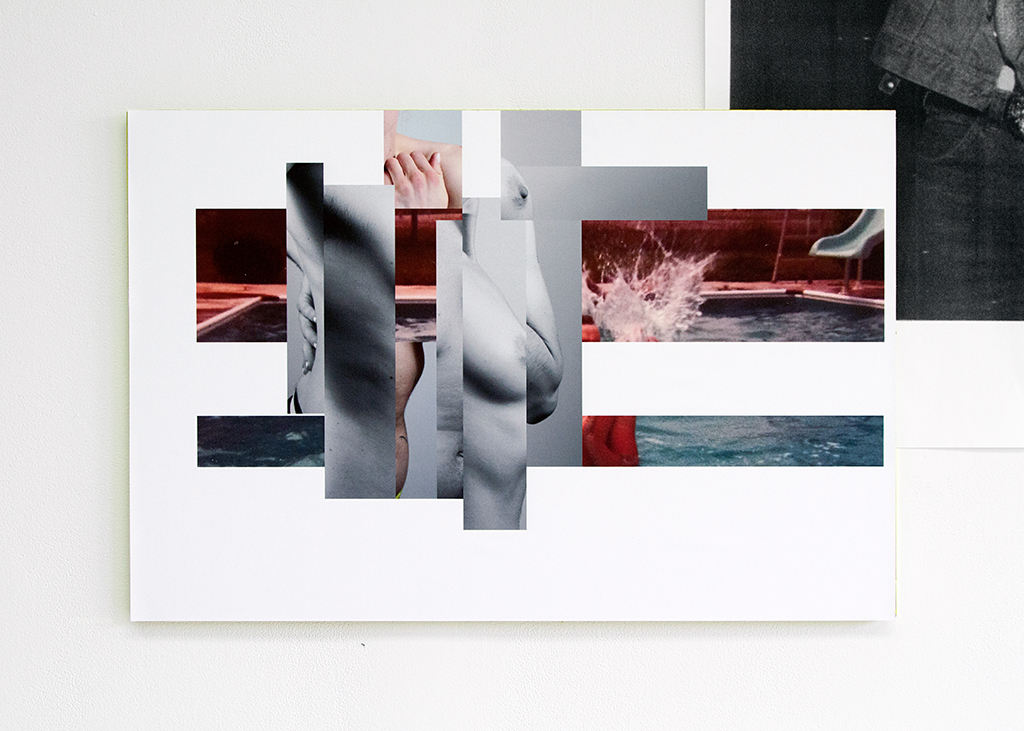 ​Were you surprised that the Arts Common censored your work ?
I was very disappointed about the censorship, but not really surprised. Arts Commons has been known for censoring work based on it being “inappropriate” for the space. I know of one other trans people work being censored several years ago, and work by a woman of colour more recently. Arts Commons does not promote critical/ potentially confrontational artwork.

On Nov 17, 2018, Ontario PC Party has passed a resolution to debate recognition of gender identity. What are your thoughts on this? and Ontario government recently released a new sexual-education curriculum. These decisions have further censored the gender diverse community and gender expression. How can we help raise the visibility of gender diversity when institutions and governments trying to oppress trans community and other minority groups?
I think that a lot of trans folks and allies are doing great work in advocating for trans rights in Ontario and the states. The backtracking of the Ontario Sex Ed curriculum is devastating since it will remove all mentions of consent, and obviously it will be focused on procreation. I can only hope that teachers who are allies will continue to fight these changes and help trans/queer students get the information they need. We have always fought for our right to exist, that won’t stop because our governments want to destroy us.

I don’t think the issue is trans visibility- it’s the issue of cisgender people in power not  respecting us or caring about our well being, and these damaging legislative changes continue to manifest themselves physically against trans people. The issue is these people in power are treating gender variance as a theory and a liberal ideology- not as a reality for millions of people.
​

When you first learned about non-binary genders, what thoughts and questions did you have?
Honestly, I didn't have any questions, I just thought, that makes sense for me.  I no longer identify as non-binary because I feel the term, for me, places my identity in opposition to being a man or a woman, and that's not how I feel. I prefer the term gender variant, because for me it truly does vary on a day-to-day basis, and often I feel like a combination of the two.

Non-binary is a settler colonial term, so we have to remember to place it within that larger conversation. Gender variance, third/fourth genders, and Two-Spirit folks have been widely accepted and honoured before white settlers (my ancestors included) came to Turtle Island and fucked everything up. I think that historically gender variant, non-binary and Two-Spirit people have been left out of larger conversations due to settler colonialism. Lately though, I have been seeing a lot of gender variant artists, performers, writers, health care practitioners and activists having conversations and talking about gender identity and expression in public/online spaces.

A great article and project everyone should check out is Zachary Drucker’s collaboration with Broadly called the Trans Legends oral history project. Zachary recently interviewed Miss Major Griffin-Gracy, I encourage everyone to listen to their conversation or read the transcript.

Can you explain why non-binary is a settler colonial term? do you mean the term non-binary was created because of settler colonialism?
​The term non-binary speaks to not belonging to the gender binary, which is a phenomenon white Europeans, and subsequently white settlers, are obsessed with. So yes, I see the term "non-binary" as an opposition to colonialism. Our existence as trans, Two-Spirit, genderqueer, non-binary, gender variant, the list can go on, is a constant refusal of colonial ideologies. We cannot thrive within a system that has historically attempted and continues to try to erase us. Gender variance has always been here, no matter what language is used to describe it. I think the larger issue I'm concerned with is that a lot of folks think gender variance is new or trendy right now. Travis Alabanza wrote a really great article speaking on this topic if you want to check it out!

Is non-binary being a trend a good thing or a bad thing? I think because more people are aware of this topic and media discusses about it without learning the history of identity and gender variance, the term loses and blurs its true meaning and importance.
I don't think trends are inherently bad or damaging, it all depends how we talk about ourselves as trans folks, and how non-trans folks decide to talk about us. White non-binary folks especially, if they do not know already, need to learn about their trans histories. To me, that means learning about the BIPOC trans folks who are pioneers in the fight for trans liberation.
​
Being more "visible" is also not inherently good. Sometimes visibility for trans people results in violence and death. We need non-trans people's perception of us to change in order for visibility to be safe and liberating for trans folks. Non-trans folks need to try harder and come from a place of respect, not a place of curiosity with transitioning. 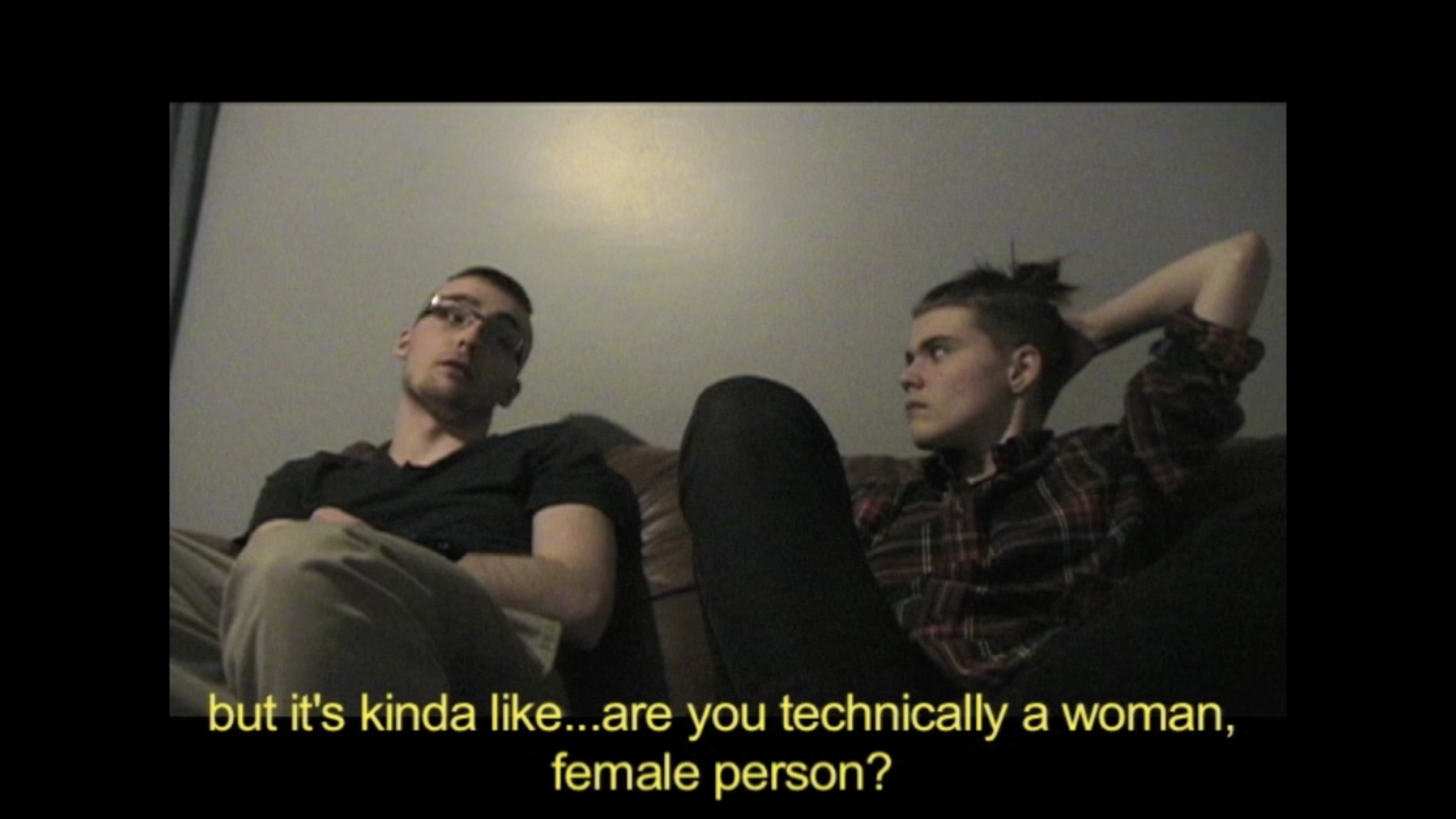 ​What have you been working on recently?
I am doing a masters degree in Information Studies/Archival Studies, so my art practice has been less active since September. This summer I plan to work on A Thousand Cuts more; I want to develop it into a larger installation piece. I have an ongoing documentary series that I want to keep working on, the first of which will be available through Canadian Filmmakers Distribution Centre early next year.

​What is the documentary series about?
The documentary series is called “Protector” and is about my uncle’s experiences living with Dissociative Identity Disorder (DID), and our relationship in general. We both suffer from mental illness and we are very close, so it’s mostly about unpacking how we talk about things, and what we have avoided talking about in our family. I’m not sure when I’ll get to shoot more footage for this series, but hopefully soon!

Has it helped your uncle's and your recovery?
Recovery is such a huge concept, but in some ways I think we have definitely helped each other. It's difficult to describe the therapeutic experience that can happen when you connect with someone on such a deep emotional level and can talk about your experiences, good and bad. With mental illness, I think the idea of "recovery" is impossible, and not the point. How do I recover from mental illness when I have never existed without it? I am not trying to return to a version of myself that is impossible to fathom, and neither is my uncle. You learn to cope and find joy, and that's a lot easier when you have a community.

There are still lots of people who are struggling with mental illness fear of talking about mental health. how would you encourage them to talk about it?
This stuff is hard to talk about. I think a huge issue is people who do not experience mental illness are afraid of addressing it. Support your mentally ill family members and friends. Often times we need you to reach out when we can't. Also, do not tell us to not take medication, to just "go for more walks", to eat better, or that certain medications are better than others. Every brain is different, and a lot of us need to try several things/combinations until we find something that works.
​