currently lives and works in Vancouver
Website: ​www.janeqcheng.com/
Published Thursday Jan 3, 2019
all images copyright and courtesy of the artist
​

You studied illustration when you were in school, how does illustration play a role in appropriation and reproduction?
Part of illustration relies on the effectiveness of its imagery to bypass language and to circulate ideas into mainstream culture. Since circulation can be deemed a priority for illustration, ideally the visuals need to be as eye catching, memorable and on trend as possible. The trendier the style the more it would circulate, thus the reach of successful illustrations would influence more developing illustrators. I became interested in this market induced style appropriation and how this affects illustrators in a saturated visual landscape. This was the shift from creating illustrations of my own to exploring the work of others.

My project Study of Peers allowed me to access intimate understanding into the formations of other illustrators who were also figuring out their own visual voices. After working with and around them, we created small scale studies, directive and non-directive interviews and collaborative journals looking into their sources of inspiration. As their projects were being created, my replicas were created simultaneously but at a smaller scale, making the same changes and mistakes made in their processes. As part of our grad exhibition, both works were presented at the same time and displayed within proximity to each other. 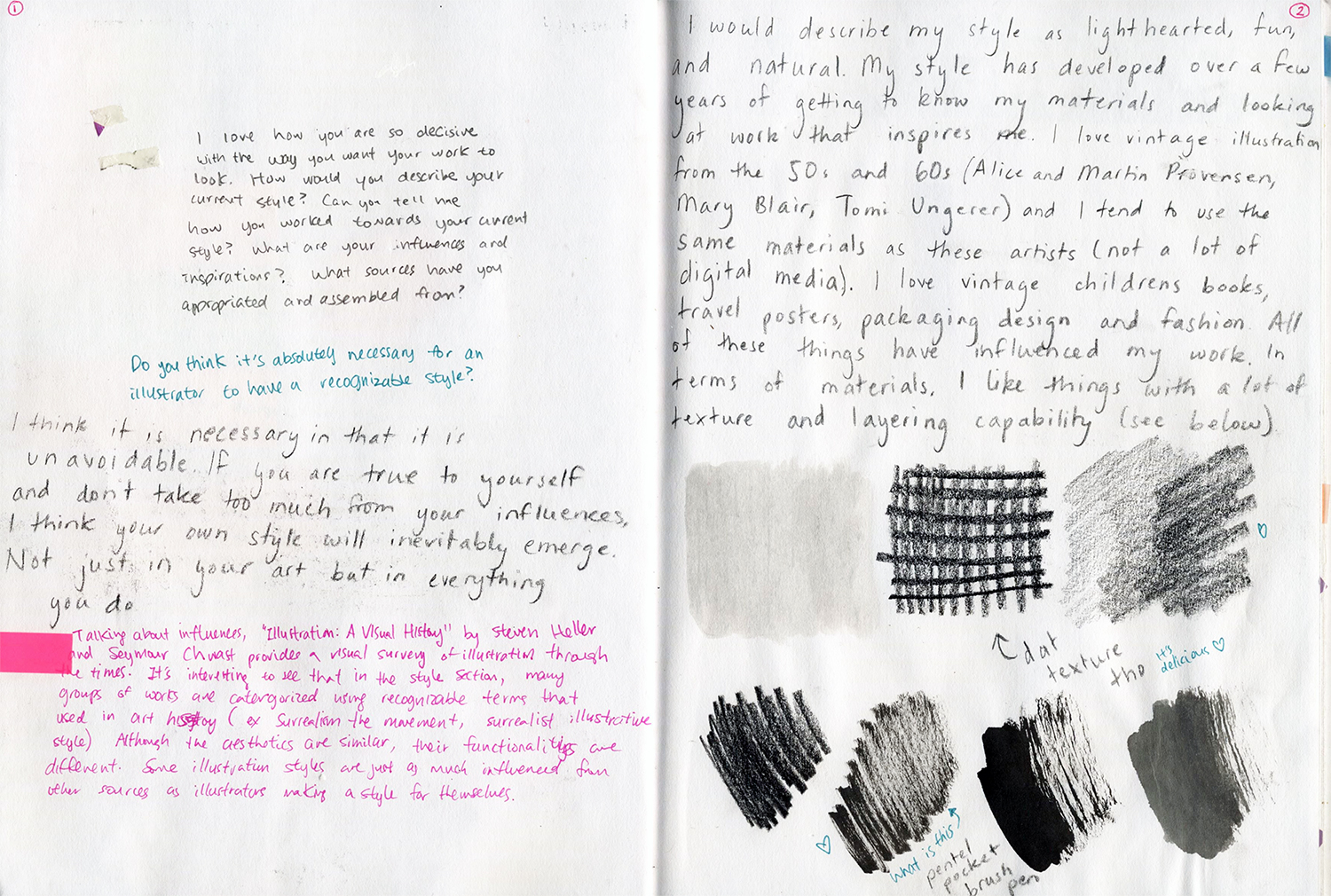 ​​
For Study of Peers what were your peers' reactions and responses when they saw your studies? I remember when I was in my undergrad, I took some discarded materials from garbage bins, the materials were used to be students' artworks, and I used them as my own. My professor noticed it and told me it wasn't appropriate. this just came to my mind. yours were different since you asked them for permission, I did not but I was like why did I have to ask for permission if they were already in bins.
Which class were you in for your professor’s reaction to be like that? Haha. For my project it was necessary to ask for permission. Logistically, I was in their space and taking their time, and the project included a personal and interview-like element which required a lot of interaction which helped me learn more about their work. It was enjoyable for both parties to watch the same project being made at the same time along with the same mistakes.

Have you thought of replicating your own work, like trying a different perspective to learn about your work?
I did give it a thought, but at the time my works only consisted of illustrations, and I had more interest in studying the illustrations of friends whose work felt more developed. It might be something fun to revisit and explore now though! There was a show called “Forth and Back” by Toronto painter Erin Loree at Peter Robertson Gallery, where she replicated her own paintings, the first one being reactionary and the second is a study of the first. I really enjoyed that idea of studying something spontaneous. 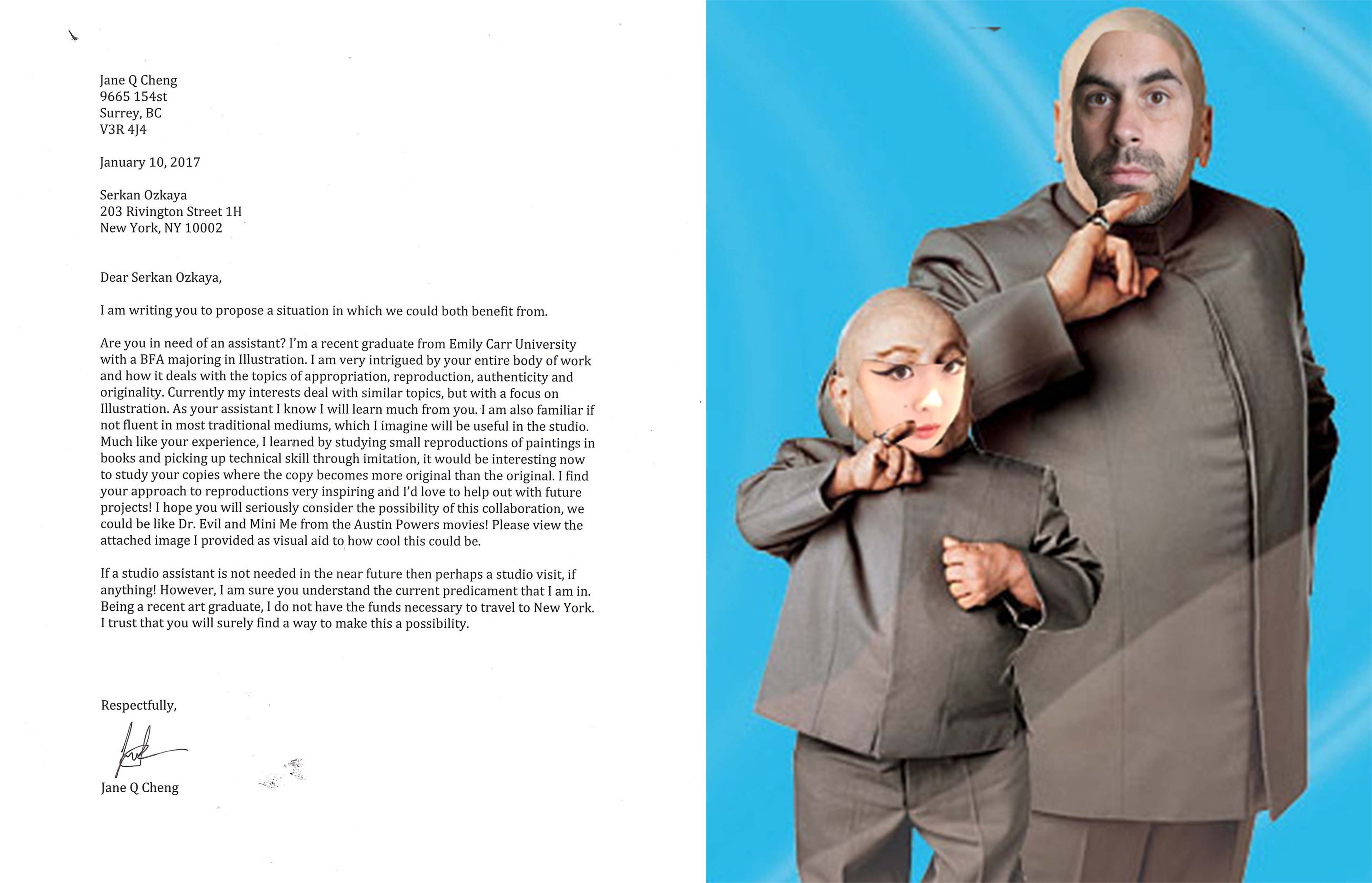 ​
How much had you learnt about Serkan Özkaya before you sent him "a situation in which we both benefit from"?
Serkan’s work David (Inspired by Michelangelo) was mentioned in an article about appropriation. After looking through his website, I came across his piece Dear Sir/Madam and took interest in his approach to institutional critique. This was all I knew about Serkan before deciding to send him my rendition of his letters.

What if he didn't respond?
Honestly, I didn’t think I’d get a response! For me the project would have been completed at that point. Since he did, I decided to see how far it could go. It transformed into a mentorship with me staying in New York for four months. It’s nice to get the opinion of someone who works so often with appropriation and was also an excellent introduction to New York.

The mentorship was like a performance, since you both deal with similar topics, did you observe a distinction between your approach and his approach to appropriation and reproduction?
The mentorship was exciting for exactly this reason. The main question going into it was what would happen if I studied under an appropriation artist? He deals with the idea of copy in very interesting and dynamic ways, but the main distinction between my projects thus far and previous appropriative projects is the direct and personal nature of it. Elaine Sturtevant was a major influence to my work, I found it so interesting that her Warhol silkscreens of Marilyn were made from the same screens that Warhol used.
​ 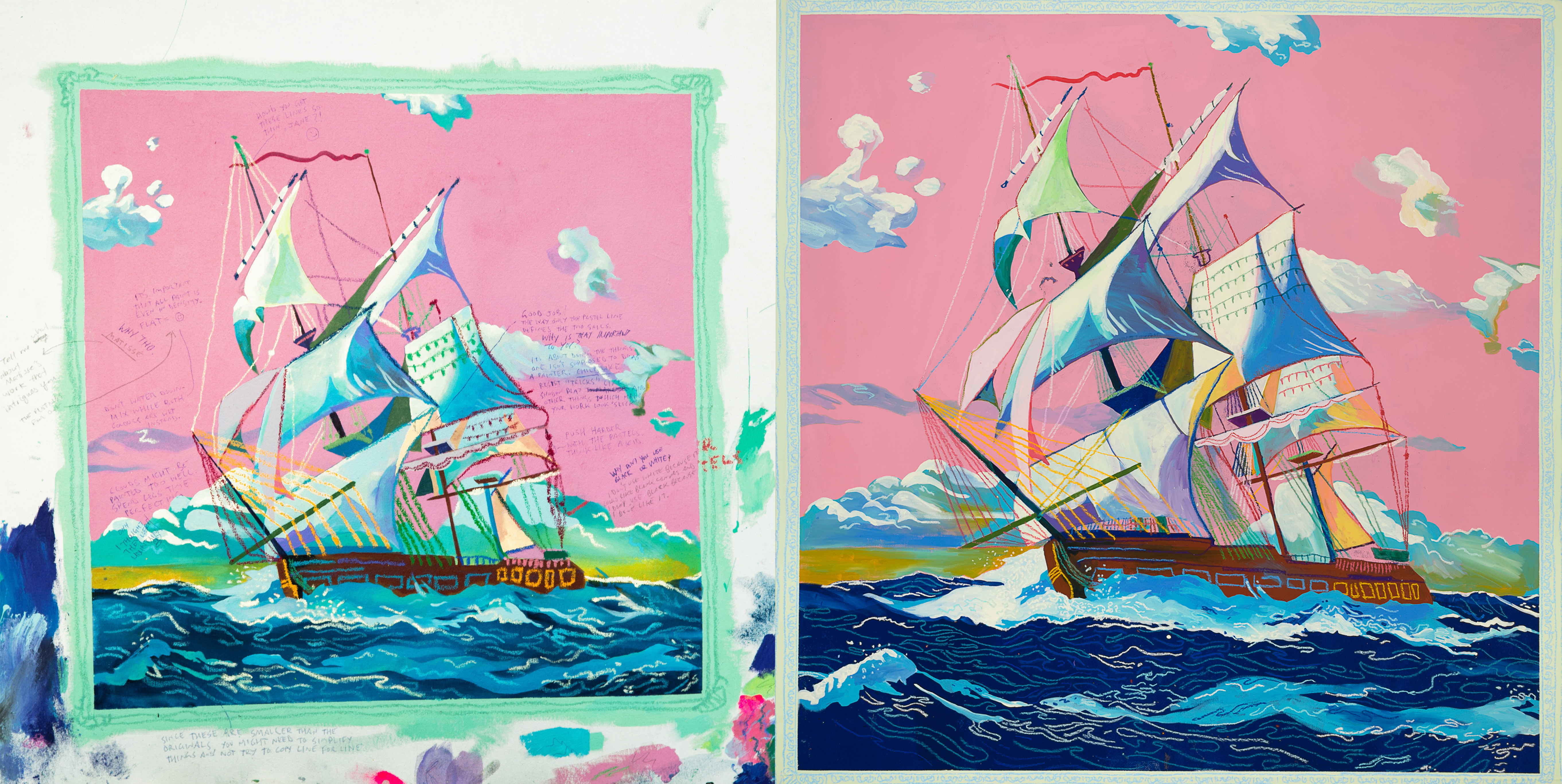 Should 'copy' and 'original' be equal?
I believe flexibility is needed as well as other perspectives to consider, such as Theseus's paradox, which asks the question of whether or not a ship being replaced with identical parts remains the same ship in the end? This applies to examples from Japan where temples are in cycles of renovation and in China where newly produced terracotta warriors (made in a replica workshops beside the actual evacuation site) were shipped out to major museums, which led to issues arising due to differing definitions of authenticity. Continual reproduction such as the examples mentioned can be seen as preserving the “original” through reproduction, bringing back to the ‘original state’. 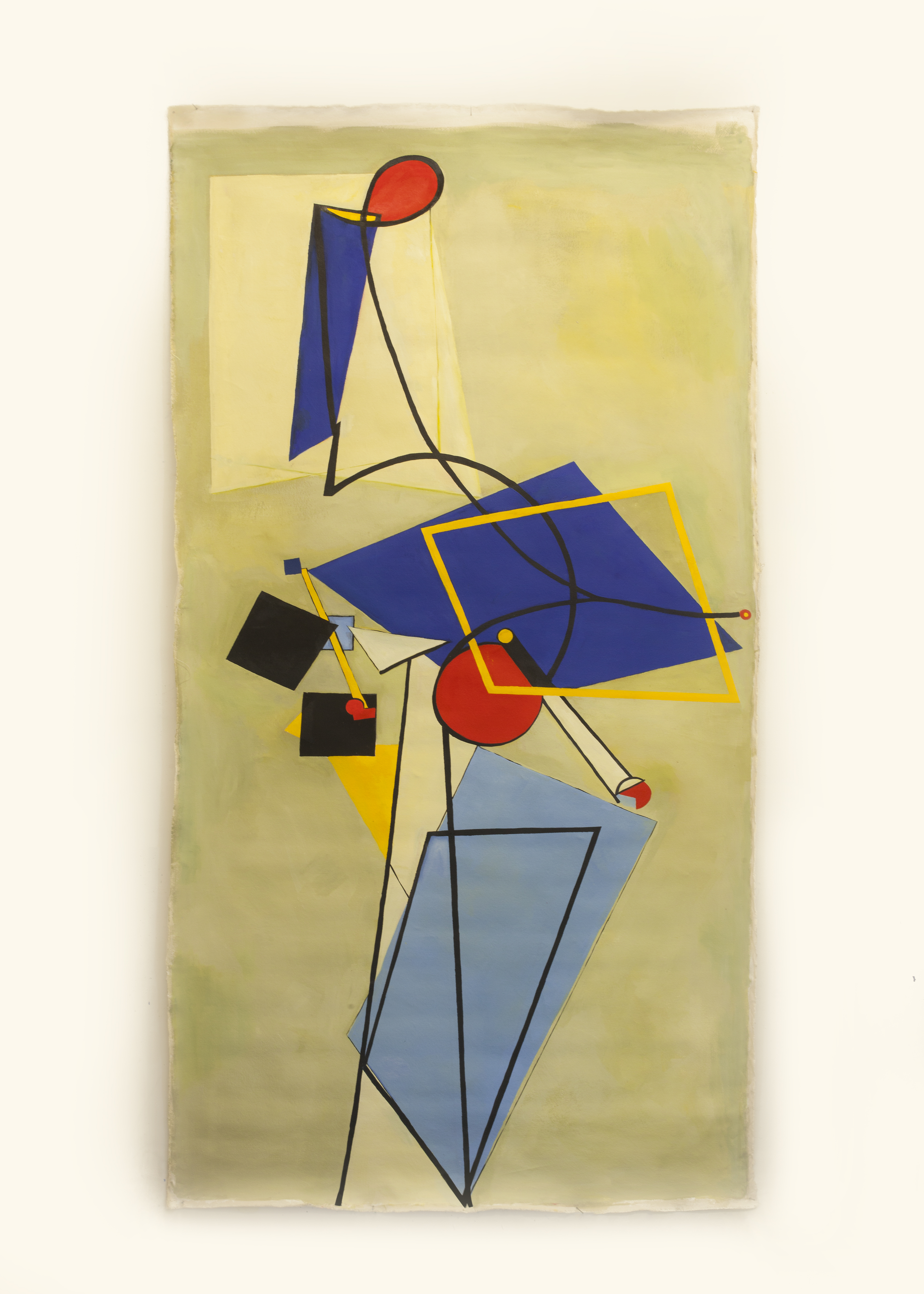 Lee Krasner's Mural Study for Studio A, 2018, oil on canvas

​What project are you currently working on?
During my time in New York, I worked on a piece called Lee Krasner's Mural Study for Studio A where I created a mural that was supposed to be completed by Krasner for the WNYC radio station in Manhattan. She left a final sketch as well as many others leading up to her last design. Due to WPA (Works Progress Administration) funding being reallocated to war efforts, Krasner was unable to finish her mural, where her work would have been accompanied by murals from artists Byron Browne, Stuart Davis, John Von Wicht, and Louis Schanker.

My intent was to have it installed in its intended location, but that proved to be a difficult task, as well as expensive. So for now, until I am able to, the mural will be exhibited in different locations. 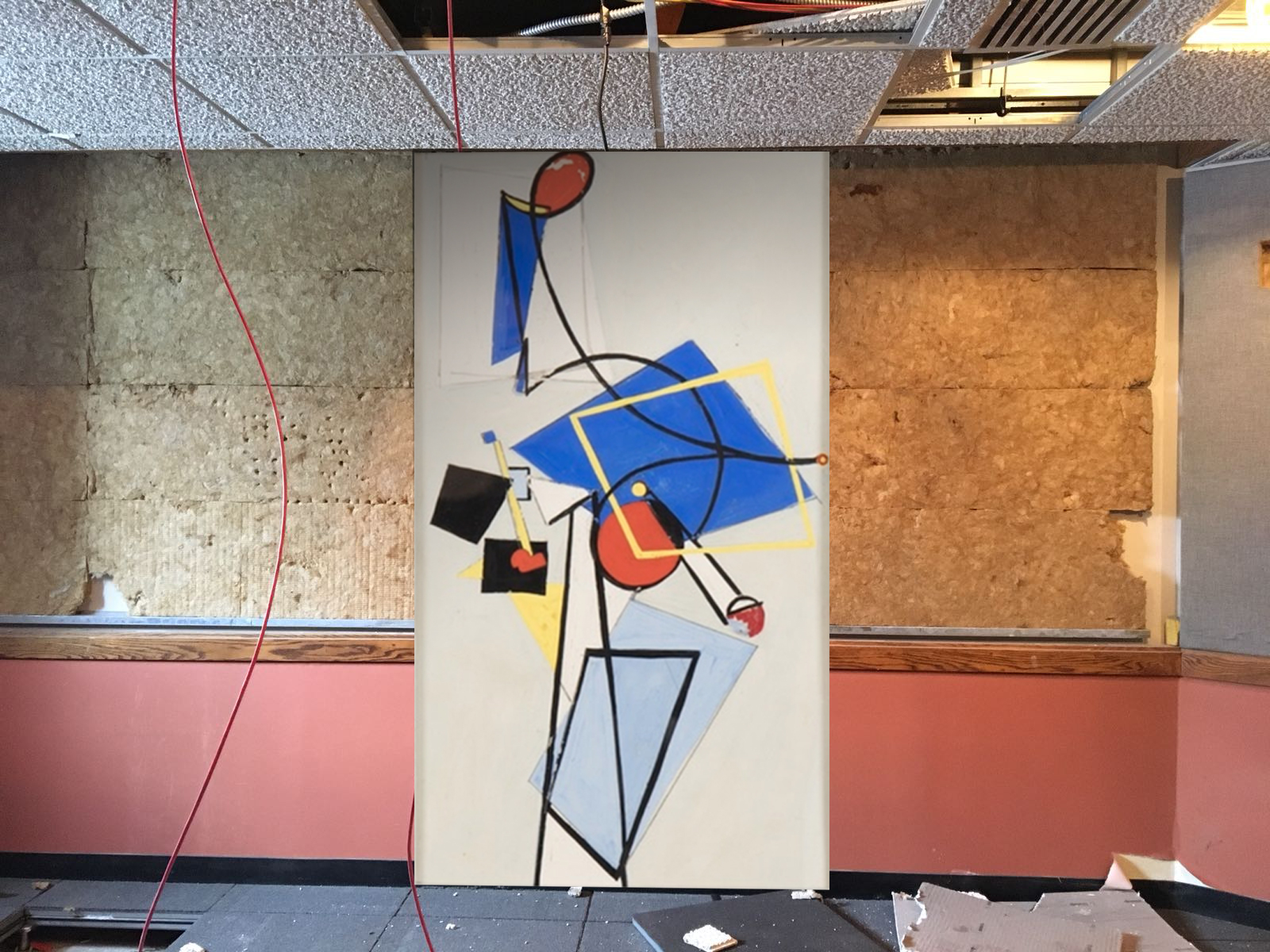 Mock up of Lee Krasner's mural in Studio A, David N. Dinkins building

How was the residency in Thailand? Did you have tom yum and durian?
I was in Bangkok doing a two month residency at Tentacles Gallery. I think I gained ten pounds from all the food I had in Thailand, tom yum and durian included! Major food baby vibes. The residency was good, it gave me a chance to explore something else. I ended up teaming up with another resident and worked towards a theoretical app concept, then presented it in a TEDtalk-esque performance. It was centered around big data and forms of control.

Would you do another residency in Thailand?
Yes, I loved it there. ​

Any upcoming plans for 2019?
My grandparents plans for me include getting me married (not happening anytime soon haha). My grandma even brought me some nice marriage blankets.